They are mouldings coated and embellished with a thin layer of fine wood (such as briar).


Briar mouldings are the typical example of veneered mouldings. Their characteristic is to be covered with a thin layer of briar wood which has the task of embellishing the underlying wood, making it appear as a quality product. 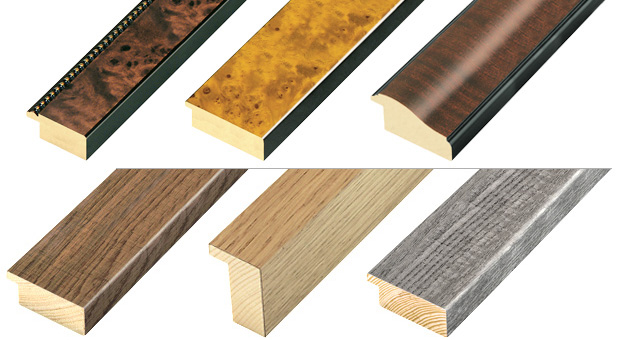 The thin layer of wood is technically called "sliced". Once it was called "veneer" from which the name “veneering" is derived, which is the operation of applying the veneer to the wood.
It is a technique used since the Renaissance, when furniture made of low-quality solid wood was covered with a layer of noble essences. The veneer was made by cutting the wood into sheets with a thickness of about 5 millimeters. Then the sheets were glued to the external surface of the furniture.
At the beginning of the 19th century, with the introduction of the machines, the wood was cut into sheets with a thickness of a few tenths of a millimeter. In this case, the sheet of wood acquires great elasticity and can therefore also be applied on curved surfaces.

The veneers are used to be applied to various types of support such as plywood, laminate, MDF or less noble wood blocks to produce finished objects that have a similar appearance to solid wood, but with lower costs, greater resistance to woodworms, greater lightness. and greater stability.

After blanking, the wood is dried in mechanical dryers. Some modern dryers literally "iron" the veneer by reducing its innervations. The trunk is then roughly trimmed from the side and from the head, gathered in packs of 32 sheets and numbered pack by pack.

The woods used to obtain the veneers are especially exotic and expensive ones such as mahogany, rosewood, cherry and especially the various types of briar. Briars are obtained from the roots of some trees.

Since several years, there are also artificially obtained veneers that imitate the finish of the wood.
They are often produced with melamine paper, which is a material consisting of sheets of very thin paper (around the tenth of a mm) impregnated with melamine resin.
Synthetic veneers are mainly used to cover the panels and make them become "ennobled" panels.
Such panels are often called also "melamine panels”. 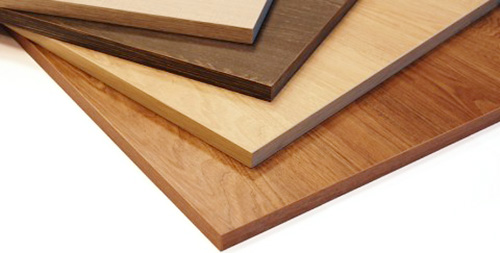 The panel can be made of chipboard, or recycled wood, hardboard, plywood or MDF. The development of ever more realistic melamine papers, with remarkable qualities of hardness and scratch resistance, makes the melamine panel widely used in the world of furniture.
Synthetic veneers are increasingly used also for veneering of mouldings for frames. The advantage of synthetic veneers are:
• Much lower cost than genuine wood veneers.
• Greater uniformity in the finishing There is no difference in finishing between different batches of veneered mouldings.
• Standardization of dimensions. The synthetic veneers obviously do not depend on the different dimensions of the tree, as for the genuine veneers of wood. It follows that all veneered rods can have the classic length of 3 meters.
• Greater resistance to woodworms as the woodworm has greater difficulty entering the wood below.

Compared to "normal" auctions, veneered auctions have some points to consider, namely:
• The price of veneered mouldings is on average higher than non-veneered mouldings. The increase is approximately 20%
• The veneered mouldings may have the defect that the veneer that covers the wood tends to unstuck forming bubbles. This defect is particularly visible if the cut is made with the guillotine, since in this case the moulding is subjected to the pressure of the blades that press vertically.
• Another defect could occur when cutting at 45 ° especially for flat mouldings. In the joint of the corners, the veneer, especially if it is synthetic, could "withdraw" so as to allow a glimpse of the underlying wood.