It is usually not that difficult. By following a few simples rules you should be able to overcome most problems and achieve good results.


Does restoring paintings form part of a framer’s duties? Certainly not as it requires a great deal of technical and professional restoration knowledge (which an average framer doesn’t generally possess). It is thus preferable to pass this work onto an professional restorer.
However the cleaning of paintings can more easily fall under the umbrella of picture framing. It is a common request by customers and can become a substantial money maker for the framer.
Dirt accumulates on paintings over the years as a result of smoke, pollution, insect excrement, etc. You have probably all heard of those magic formulas for cleaning paintings such as using milk, a sliced potato, onion juice, etc. Forget it. These materials leave unwanted residues. According to Helmut Ruhemann, noted restorer and author of the book “The Cleaning of Paintings”, another strange system that is however the best and safest way of removing dirt, is to use saliva.
“I wonder how many years it would take to clean Rembrandt’s “Night Watch” says Paul Frederick, in his manual “The Framer’s Answer Book”.
The saliva is collected in a container (don’t hesitate to ask family members and friends) and subsequently spread over the painting either with a brush or some cotton.
The alternative is to spit directly onto the painting and then spread. 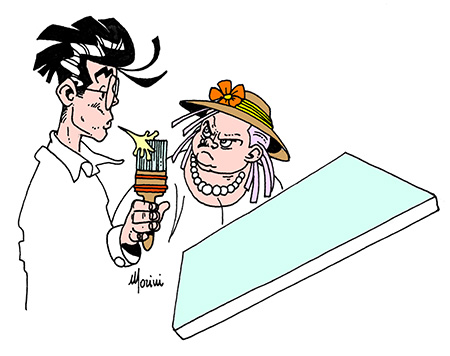 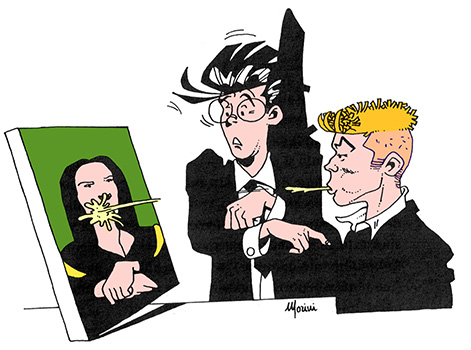 Probably Ruhemann and Frederick prefer paradox and controversial methods. We will stick to the more orthodox methods (and more hygienically acceptable).
Before setting out to clean painting the framer should possess some basic knowledge of painting techniques and at least have a general knowledge of the products used: oil colours, wash colours, varnishes, canvas and so on. It is essential to first of all know the period the work is from.
Different materials are required for the different ages.
It would be more than handy to know the commercial and sentimental value that the painting possesses to the customer. A highly valued painting may prove to be too costly for a framer to replace in the case of an unsuccessful or damaging operation. Also in these cases it would be preferable to pass the work onto a professional restorer.
The first technical obstacle to overcome is to determine whether the painting is covered with varnish (it almost always is) and in what condition it is in. Glossy varnishes tend to yellow over time or detach from the painting. The varnish needs to be removed and with it all the accumulated dirt.
There are various suitable products on the market for removing varnish. They usually all contain solvents, ammonia and alcohol.
We will look more closely at anacrosine, a soap liquid that we have found rather effective. It is made up of various solvents that remove both the varnish and the dirt in one phase. It is a product easy to use thus particularly suitable for the inexperienced framer (code 5251 in Rinaldin catalogue). The cleaning is performed as follows and is a method that is valid for all other similar products. One bit of advice. In order to avoid unpleasant surprises it might be handy to first try the whole operation on just one small corner area of the painting.
Go over the painting with a soft brush in order to remove surface dust and dirt. Then examine the painting in detail. If the paint is cracking, chapping and/or detaching in flakes then it is a restorer’s job. Don’t touch it.
If however the surface is in good condition then proceed.
Lean the painting horizontally on the work bench and place some cardboard under the painting so that the empty area fills up.
This means that any subsequent cleaning operations will not alter or damage the loom.
The anacrosine is then delicately and evenly spread over the painting with a soft bristle brush.
The saponfication of the varnish and the dirt is thus obtained. Then it is left to completely dry. About a quarter of an hour is sufficient but this can vary depending on the environmental temperature and amount of product used on the painting.
Now the crust, that should have formed as a result of the anacrosine drying, is removed together with the varnish and the dirt. A sponge is dipped into hot (but not boiling) water. It is partially wrung and passed over the painting. The procedure is repeated as many times as is required to remove the crust.
The painting is then left to dry so that mould does not form as a result of the humidity.
The drying should be complete on both sides (the painting surface and the back of the canvas).

The protection of the cleaned paintings
The oil painting is now completely clean; the colours, now free from dirt and impurities, are revived and have returned to their original tonality. We must now protect the painting by re-applying the varnish.
For oil paintings the most suitable varnish is Damar, a natural resin used even way back in antique times. It possesses substantial adhesiveness and “yellows” very little over time. Both glossy and matt are available. It is advisable to combine both (a 50% mix is usually optimal) in order to obtain an satin finish that reflects light much better.
The varnish should always be applied with a brush and never with a spray bottle. Spray is not even enough and unpleasant drops can form on the painting. The brush must have soft bristles so that the streaks are less noticeable. The brushing must be performed in opposite directions (horizontally and vertically). The painting should be left to dry for at least a week before framing.